I think my blog is turning into a photo blog more than a this-is-useful-or-exciting blog. Sorry about that.  This post will be no different, as Istanbul was eye candy.

Turkish delights. So we'd seen enough movies where they were mentioned, but we'd never eaten them. Therefore, trying them was definitely on our to-do list for Istanbul. Mission accomplished, and suitcase packed with a couple several lots of spare treats for later. Yum! 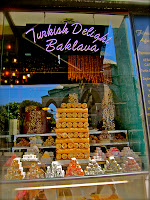 The history and architecture of Sultanahmet (Old City Istanbul) is amazing and seems never ending. This was our first trip to Europe. Wow, right? Days of walks with ocean breeze, street side cafes, people adorning our girls with affection, beautiful sights and wonderful food was almost more than our tired minds and taste buds could take. Four days was not nearly enough, and we absolutely see another trip to Turkey in our minds. 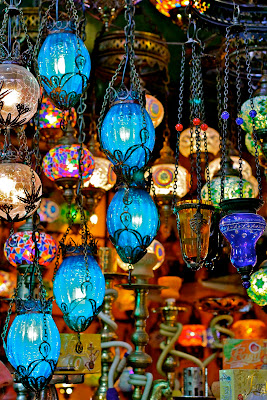 Our hotel, the Best Western The President, was in a great location for us to see the sights down near the waterfront or the Grand Bazaar area. We walked for hours each day, never running out of sights to see. The hotel staff were beyond great, even upgrading us from a nice junior suite (we are finding a separate bedroom necessary for naps and sleep for the entire family with Avocet so little yet) to their Presidential suite. So we enjoyed a huge room with a beautiful view of the Marmara Sea for days. Wonderful! Each time we went out or came back, the bellmen were all over the girls and so personable. I can't think of a time we've had more friendly or wonderful service in all of our travels.


Turkey also wins the award for most people fawning over our children. On many occasion, we'd see big and burly Turkish men drop to their knees literally kissing and squeezing on Avocet's chubby legs. They would smile and "Mashallah" (God's blessings) to the girls, often while pinning on a nazar charm (blue eye) tiny pins to ward off evil.

On our first full day, we banged out the must sees: the Hagia Sophia and the Basilica Cisterns. Any other sights we'd manage to see were a bonus, but these were the only two items I didn't want to leave without visiting, and luckily they were right across the street from each other.

Maybe because we haven't been to the many cathedrals of Europe was it that we found the Hagia (or Ayasofya, Turkish) to be so amazing. Or maybe it was amazing to us because it is just that beautiful and historic. Per Wikepedia, it began as an Orthodox patriarchal basilica, later a mosque, and now a museum. From the date of its dedication in 360 until 1453, it served as the Greek Patriarchal cathedral of Constantinople, except between 1204 and 1261, when it was converted to a Roman Catholic cathedral under the Latin Empire. The building was a mosque from 29 May 1453 until 1931, when it was secularized. It was opened as a museum on 1 February 1935. Its history alone is mesmerizing.

I'm sure you'll tire of photos of the Hagia Sophia, but every time I went to put down the camera I thought "just one more, just ONE more".

The Basilica Cisterns were suggested as a must-see by a friend who had recently been to Istanbul. They did not disappoint. You can read all about them here. Being underground in these ancient reservoirs felt like walking out of a J.R.R. Tolkien book, complete with the Balrog about to emerge from behind the pillars (gotta know your Lord of the Rings to understand!).

A few days later, we toured the Blue Mosque (beautiful, but might I suggest you see this before the Hagia Sophia to have more impact).  Amazing tile mosaics.

In front of the Mosque is the Hippodrome, the circus where sporting events and social gatherings were enjoyed. We stood beside a pillar which stood as a marker for the chariot races of the Byzantine empire. Such a history lesson. We also stopped at the Sultan's Tomb on the way back to our hotel. 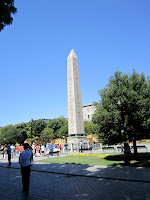 The remainder of our days were filled with food,

buying dress-up clothes (Papa is a way bigger pushover than me),

walking through the Grand Bazaar, 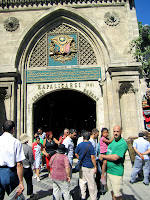 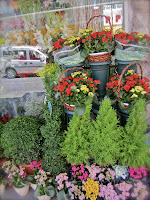 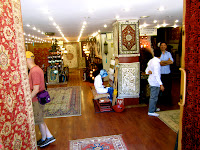 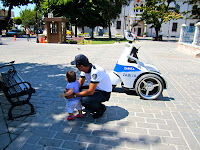 and best of all... naps, enjoying each other's complany and breathing fresh air.
Oh... and testing out the shocks on the stroller after long days exploring. 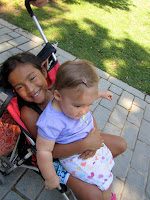