Nature indoors... for a while

When our landlords showed us around the house, the conversation of "pests" came up. They said rarely one sees one or two around the house, but they spray occasionally along the outside doors and that generally deters future guests from getting too comfortable. 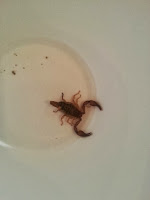 When Chris and Nic went in the underground pool room (pumps and things), down the skinny hatch and narrow ladder hole, Nic mentioned the occasion scorpion might hang out on the walls in the dry summer months.

Today, while on the phone with a friend, I spotted a guest with peripherals enroute to the kitchen. I first looked for exactly where Avocet was and then near breathlessly whispered "Ahh, scorpion". To which she had to ask me to repeat myself. So another near whisper came out, and she instructed me to smash him. I said I'd rather relocate him, her laughter followed by "You're crazy! Call me back.".

My blood racing, I nearly frightened Ceti to death by the serious, "Stay back! Ouch!". So while she obediently huddled by the kitchen doorway, I tried to spatula (I have limited resources here folks!) him out from under the wine cellar door (which lays flat on the floor). He raised back (to DEVOUR me!) and in doing so, got wedged between the door and tile with one pincher. So on to open the cellar door, child still in fear and my heart thumping, scurry for the lights, check the walls and chase him down the stairs with cereal bowl and spatula in hand. Scoop him up, I did! And then proceeded to search for any other buddies who needed to be located with him. All clear! 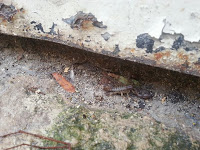 We enjoy our several large millipedes who move around the house at night and curl up on various rooms in the house, but the scorpions... not so much!
Posted by Denise at 3:59 PM