This weekend, we spent 2 nights and 2 and a half days away sans wee ones. Living overseas and being away from family and friends is hard in so many ways, but the reality that it's near impossible to leave your children is stark. We'd never leave them in Malta and go away away, like fly away. But we enjoyed a staycation a few towns over with the security of a great/amazing/wonderful babysitter and being just a phone call and ten minutes drive from the girls.

So Friday afternoon we giddily bounced from our home to a hotel, lulled for 2 nights and came home Sunday morning.... refreshed and renewed.
Those two mornings to enjoy a fresh breakfast while talking over a hot cup or two of coffee, no interruptions, no distractions. We both savored just sitting at a table alone for hours.

Those hours of Saturday afternoon spent in the sea. We drove to the West shore and my favorite physical place on this earth, our Fomm Ir-Rih bay. The turquoise sea beckoned, so we hiked our way to the bottom of the gorge and dipped in the cold sea, then slithered up the beach and basked in the sun on the rocky shore. 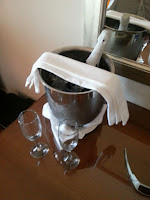 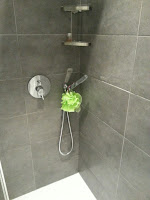 Those preparations for evenings. Dinners were events, not necessity, in new clothes and time spent prepping. Oh how we planned for this weekend. I took several shopping trips, a nail visit, a hair appointment and a pre-getaway massage for Chris. We enjoyed pampering ourselves and putting on our best for the other for this weekend, after months of tending to family and work, it was good to relax fully. Don't we all miss the days of a shower with a rest (or roll) on the bed after, then time slowly spent on makeup and dressing, no rush. Music on with a sway for the spectator here and there while you dress. The art of seduction and long looks. OK, I digress.

When the hotel heard it was our 20th anniversary, they sent up a bottle of champagne with compliments. The nice man who brought it smiled to Chris, who was laying out my attire for dinner and teased that he had us beat with his 32 years. Those long marriages don't just make themselves. This little weekend was just another little brick in our building. It's oh so much taller than when we began all those years ago, and we've every intention to build it up to touch the clouds.

And two girlies were pretty happy when we returned.
Posted by Denise at 4:10 AM