The embassy community in Dhaka had events all weekend long for Halloween. On Thursday afternoon, the chancellery opened up to trick or treaters and had a door decorating contest. This year's costume was a mermaid, but got covered up by a pink sweater which HAD to be worn.  Ceiba had fun, but isn't about anything scary just yet. She was all manners, only taking one piece of candy at each door. Several ladies shoved a handful in her bag. She went for the "red" piece at every stop, so to look in her bag, there isn't a lot of variety. All things must be red at the present for her- toys, crayons, barrettes, freezy pops. 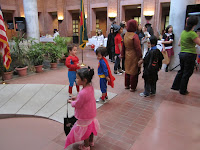 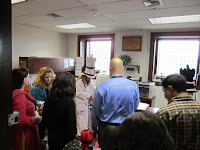 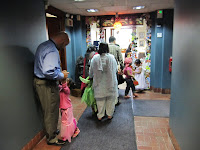 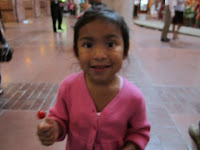 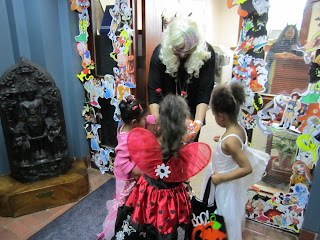 Then Friday was the Night Carnival at the American International School. We opted not to dress in costume, just too darn hot here, but Ceiba had on a Halloween t-shirt, while Chris & I wore shirts with skulls. The carnival was great! Tons of people, great lights in the trees, a nice variety of games for all ages, popcorn, cotton candy, candy, soda (Ceiba had a glass of orange soda- you'd have thought it was crack!).  Ceiba had the most fun just playing on the jungle gym with all the other kids! It was nice for us just to watch and sit :) 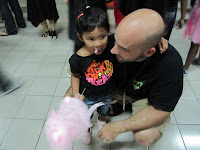 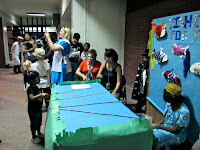 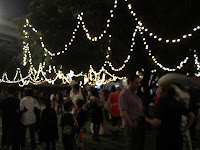 And though this pic doesn't do it justice, the "dunking booth" was classic Dhaka!!! There wasn't an actual booth of water to fall into, but instead, when you hit the target a bucket of water dumped on the guy. Chris and I laughed about that for a while! 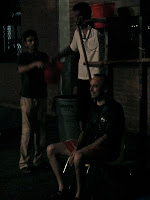 Saturday the American Club had a day of games sponsored by the Dhaka American Women's Club, but frankly we were pooped, so hung out in the pool instead. Ceiba is a diving crazy kid lately. We can barely get her to come up for air!

We baked some Halloween cookies! Of course we had to send sprinkles in our airfreight. We LOVE sprinkles!! And yes, we had to eat them all within 2 days, because otherwise they would mold or have the icing running all over the place here in Dhaka. 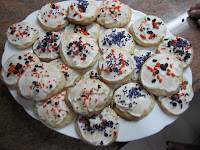 My sister's family sent a fun Halloween box for Ceiba in the mail! She had an absolute ball opening stickers, candy, books, wings, a wand, etc and reading all the fun post-it notes on everything. Good job Aunt Carrie!!! The string of jack-o-lantern lights were a REALLY big hit, and we turned them on every night. Plus some purple nail polish from Sam, which not only was fun for nails, but was used to repaint the tail of her Dora pony's tail! And the tattoo was a favorite and stayed on for a week. Other kids at the pool even said how cool it was! 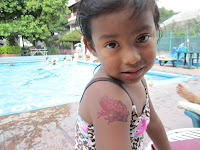 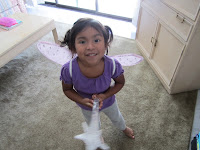 Another festive package came from Gma & Gpa later in the week, full of tortillas, crunchy peanut butter (for Papa), books, stickers, soup, Halloween socks and more. Thanks Gma & Gpa!! We love getting mail over here, especially with comfort food and goodies :) I was surprised to not see articles cut out of the Troy newspaper Gpa, hahaha. It's always fun to see Papa walk in the door with mail or a package under his arm.

Hope everyone had a great Halloween and Day of the Dead!
Posted by Denise at 4:23 AM