When we hired our househelper, she immediately called me "Madam". It made me feel uncomfortable, especially to be called it by someone more than half again my age. I actually felt ashamed; it made me feel like there was a hierarchy in our home, but I didn't want there to be one. But in the country, you can see a hierarchy still exists. And being a foreigner, I am called "Madam" by nearly every Bangladeshi that I meet.

The first time Mokta referred to herself by saying "your servant", it made me cringe. We talked that day, and I told her the word servant made me feel bad, that we were as happy to have her help us in our home as much as she was happy to have employment. That it was a partnership, and we needed each other. Since that day, I think we've both grown to know and respect each other very well. When I told her my name in the beginning, she had to pronounce it ten times. And when asked what she'd like to call me, she said "Madam". She explained that's what she has called all of her employers, and it's what is easy and comfortable for her. 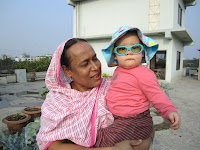 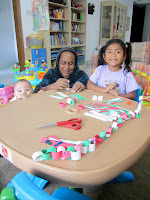 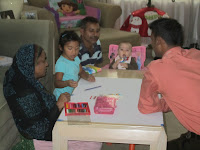 Now, "Madam" no longer makes me uncomfortable or ashamed, as I know that she is happy in our home and being a part of our family. When she says "my Madam", it feels more endearing than before. Maybe when she hears us say "our Mrs. Mokta" she also feels that same endearment. I hope so :)
Posted by Denise at 11:33 AM