Many moons ago, before children, we participated annually in the Soulard Mardi Gras festivities in St. Louis. We used to do a float in the parade every year with my sister, Debbie, and hoop in up in the Lou. 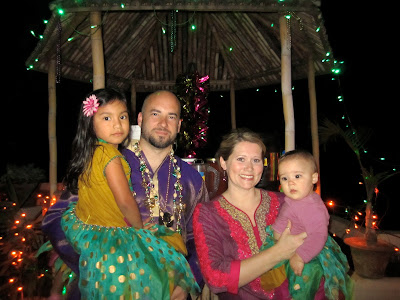 Last year, we decided we really missed the Mardi Gras festivities, so coordinated a party at our place for the embassy folks. It was a great success, and so we decided to make it an annual event for our family (at least during the overseas years, as when in the US we might actually be at Mardi Gras).
Over the weekend, we hosted our 2nd Annual Mardi Gras party, but this year, we did it on the roof. Our rooftop is usually a garden, but on Friday night, it became a party, decked out with lights, a bar (from a leftover Tiki prop from the chancery), balloons, music, food, booze and friends. We covered the tables with newspaper, though no traditional shrimp boil. The lights were hung by a local company, all 15,000 of them, which made the scene. One of the embassy GSO guys does electronics after hours, so he brought in 2 ginormous speakers and about thumped us off the roof with Zydeco and dance beats. We also took up a projector and showed The Princess and The Frog on the wall for the kids. 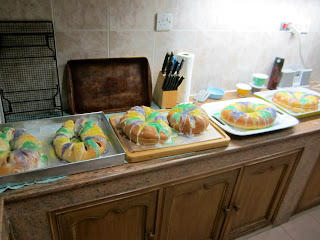 Food... no shortage in that department. Most of the guests brought either a side dish or a bottle of wine. One of our Louisiana born guest, brought authentic jambalaya and gumbo, while I made shrimp etouffee, king cakes and some odds & ends. 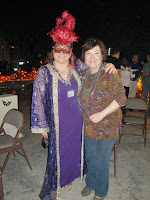 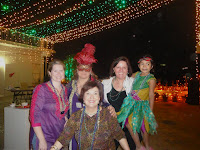 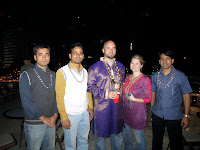 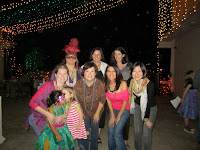 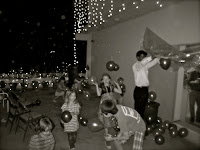 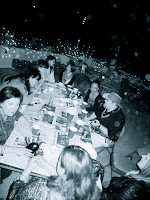 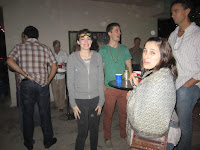 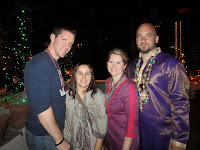 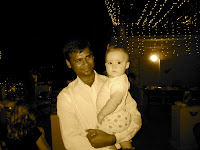 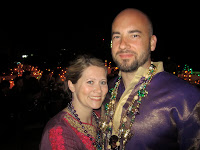 We were thrilled that many people dressed up for the occasion. Donations were made to Jaago school also, so we were happy that they could benefit a little from our festivities.

The weather was perfect, and we even had a beautiful moon for the occasion. The mosquitoes stayed at bay by the light breeze. For a few hours, we all felt that we weren't even in Dhaka.
Posted by Denise at 12:01 AM