After a trip to Bali last year, we came home to the building next door being demolished. When we returned from our baby medevac this month, there was new construction beginning in that red earth lot. Luckily, the apartment going up won't be completed by the time we depart next year. And also fortunately, the construction site is to the north of our house (won't lose the sunlight) and is also on the side of our home without bedrooms. Really, we don't hear a whole lot of noise yet, especially compared to the many other embassy families living with noise and inconvenience every day. 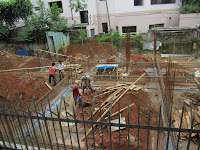 Here in Bangladesh, demolition and construction are generally done by traveling groups (maybe families?) who live on site during the process. So we have a group of people now living in shacks next door during the construction. We often smell trash burning at night, and especially did during the colder winter months of demolition. One restroom (green block above) from the previous building was retained onsite to be used during construction.They live in very modest accommodations, work most of the day and sometimes night, and generally eat and nap during the hottest part of the day.

I snapped a few shots today from our stairwell. There are no air conditioned earth moving machines, no power tools. The rebar is cut by hand and all work is manual. The women carry baskets of soil on their heads, moving piles from one spot to another. Construction does not move quickly, but it is miraculous to watch a building be raised. The people here work very hard to make a living.

While I was snapping photos, one of the young men saw me. I tried to be discrete and moved to another floor in the stairwell. We made eye contact, and he motioned me to come down. I just smiled and went back in the house, later deciding I really would love to have the opportunity to take some closer photos. Work stopped when I walked on the scene, all eyes were on me. It is normal to purposely not smile for photos, so I always enjoy when I catch a smile out of someone. They all enjoyed seeing their photos on the LCD screen. Of course, one woman asked for taka (money) before I left, but a nice gentlemen spoke to her in Bangla and smiled as I walked back home. I thanked them and plan to go back next week with photos in hand for each of them.
Posted by Denise at 11:30 AM