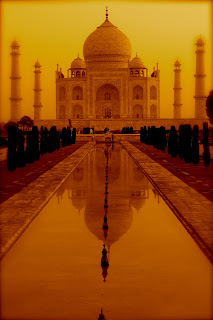 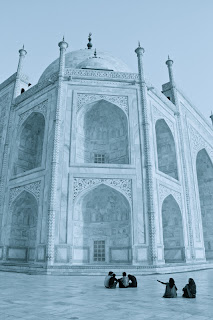 I could not leave the Indian Subcontinent without seeing India. As we are down to less than 4 months, it was now or never. Chris was happy to pass on India in the summer, and we weren't too keen on carting the wee ones around in the heat. So I got the treat of a 4 day whirlwind of the Golden Triangle (Delhi, Agra and Jaipur) with a good Mama friend.

Sitting in the Dhaka International Airport for 12 hours is not a good start to a getaway. For the love of Pete, TWELVE hours. I won't dwell, but just tell you that India was wonderful... everything my mind dreamt. It was a true whirlwind though, seeing 3 cities in 4 days and transporting by car, train, elephant and airplane. As is the case with mamas away, there was no time to doddle. We wanted to see, see, see.

In my usual fashion, but now flanked by no child luggage, I snapped over 900 photos while on the escape. I won't bore you with them all, nor is it even possible to upload so many. And I'll divide up the posts, since frankly, after 2 weeks back, I still haven't gotten to editing them all. Here are some favorites of Agra.

Ah, the Taj Mahal... or correctly the tomb of Mumtaz Mahal. Built by Mughal emperor Shah Jahan in memory of his third wife, Mumtaz Mahal, it is a feast for the eyes and a shake to the heart. Prior to their wedding, her name was Arjumand Bano Begum, but he christened her as Mumtaz Mahal meaning "Chosen One of the Palace" or "Jewel of the Palace". She died giving birth to their 14th child, but before leaving this world asked him to honor her in death. Thousands of artisans spent years building her tomb, now one of the Seven Wonders of the New World.

Below- the carvings are incredible. Many gates are made of carvings in solid pieces of stone.
Flawless...

I took the above photo of flowers in the river, later realizing this is the only visible
evidence of an earlier cremation ceremony. Another body was carried down the street
as we left the tomb. Family and friends chanted as the body passed us on the street,
covered in a white cloth and flowers, on their was to the crematory and later river.

All of the Taj photos are taken early in the morning. We arrived at 0600, though only arriving at
our hotel 5 hours before, after the airport delays and 5 hour car ride to Agra from Delhi.
The sunlight on the Taj is amazing and brain awakening. The above left photo is our guide
praying as I entered a side building. More on him to come in India blog #2 :) 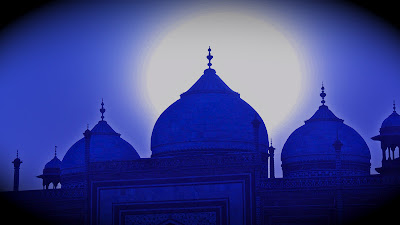