On the trip with Merill Ecotours last month, I made a great Maltese diver/gardener/hiker friend. He offered to show Chris and I a hike he enjoys, not far from his farm, so we jumped at the chance to see the Malta that the locals know.

We parked at a public lot and hiked south for about two hours, through fields which led into hills, through boulders, across windswept limestone, craggly rocks eroded by the sea. The scenery changed so dramatically in the hours we hiked, it felt so isolated, so quiet. Though the waves were harsh, the sun was warm and the sea air tingled in our noses. It was so fresh and such a bonanza to our eyes. 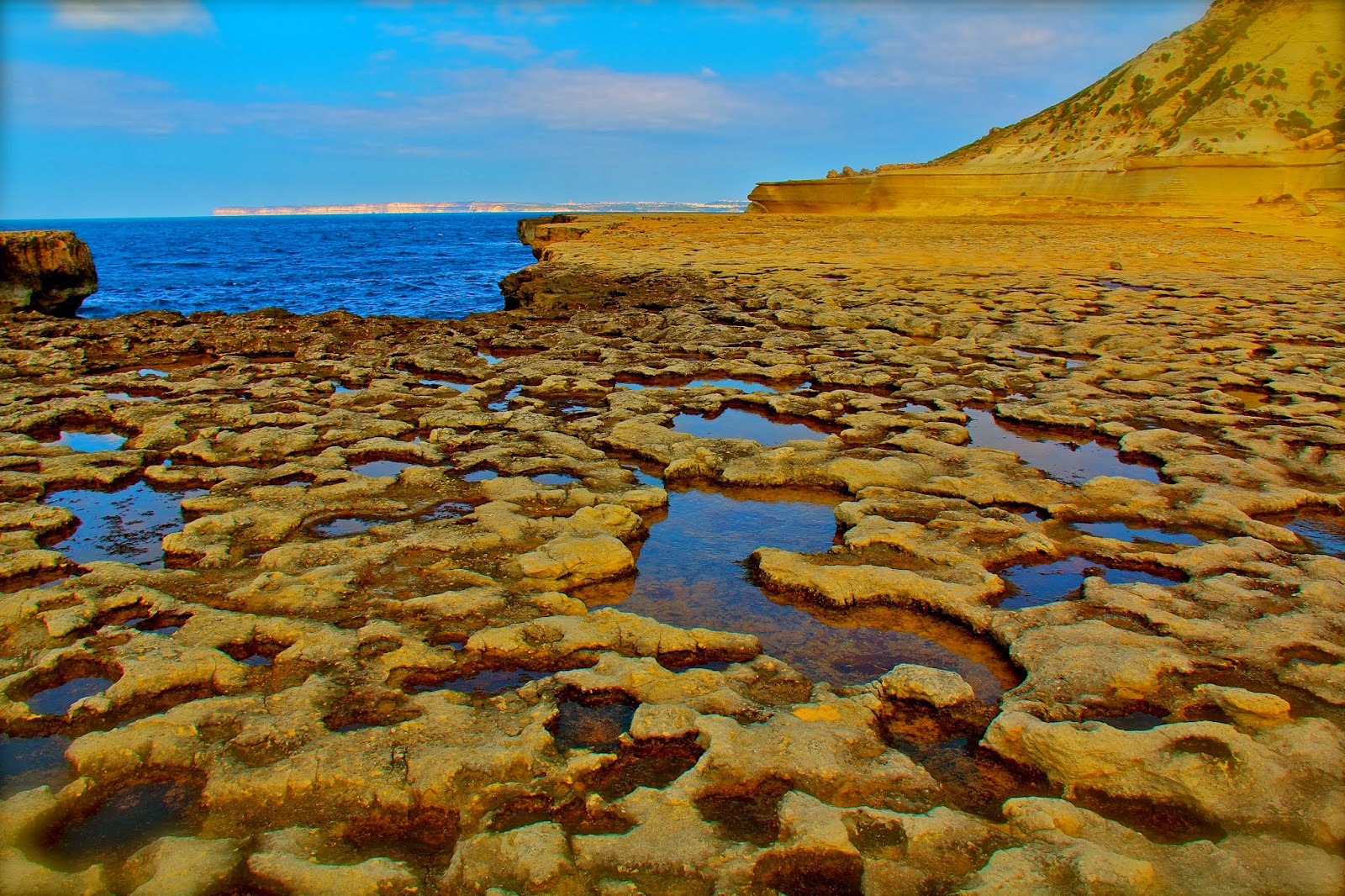 About 2/3 of the way to the sheer cliffs, where we turned back for time and to not beat our bodies too much in one day, we had to jump a crevice (which fell about 40 feet to crashing waves below). Chully went first, with practiced ease. My nerve rollercoastered, now as a mother I have much more sense than in my younger adventurous days, but the guys calmed me to jump. The far side of the jump had low ceilings, so the run and leap option could not accommodate the environment. After Chully sprawled the crevice to guide me, Chris easily leapt across and hand pulled him back across. Mission accomplished... but we still had to cross it going home. Piece of cake that direction, open ceiling and nerve found.

(our crevice hopped, above rt 2 photos)
A treat of the hike... ancient salt pans. To learn more, read here, but in a nutshell, they carved pools into the limestone, waited for the waves and hot season, let the water evaporate to expose the salt crystals and harvest. They did have some pans higher than the water lines, so dug deep wells to access water to refill the pans vs trudging down to the waterline. This area, as well as the many other salt pan sites around the islands, are beautiful as well as functional. In the past, the Maltese harvested what they needed and used the remainder as a valuable trading commodity.

Fossils abound the shorelines of most of the north and west sides of the Maltese Islands. That is a hobby for future days, but so neat to see miles of seashells and sand dollars imbedded in the stone.

We ventured back, talking all things sea and flora, hardly a better topic in my mind! This time of year, the flowers and plants are in full swing, and we sampled the flavor of several on our hike back. We viewed a pair of nesting Merill, blue rock thrush, the national bird of Malta. Birds are surprisingly rare here, due to severe and politically heated overhunting here.

(above plant is capers!)

A quick hike past the parking lot to a bay we've been dying to see, complete with a temporary runoff waterfall and lined with flowers and home we went. We can only hope to have the same amazing company and conversation for future outings, as we truly appreciated the hospitality of such a seasoned guide!