Before even arriving at post, I said to Chris how our stay in Bangladesh would not be complete without a local wedding invitation. Shortly after the New Year, one of his LES (locally engaged staff) invited us to share in their big day! Actually, they had already been married, but would be having a reception in Dhaka to celebrate.

The ceremonious dress of the bride and groom were stunning, covered in stones and gold inlay. They were ornate from head to toe. And the bride's wedding henna...gorgeous!  I'm not sure if the dress was all new for the occasion or inherited from family, but it was like nothing we'd seen before.

Chris wore a nice suit. Ceiba had a beautiful shalwar kamiz (local dress of long tunic top with pajama-like pants under), which Chris had brought home for her from his America Week trip to Kuhlna (which I STILL need to post pics from). Our tailor shortened the pants, and I found some sandals to match. The day of the reception, I also picked up some turquoise nail polish, which Papa painted her nails to match. She had some local Bangal bracelets too, but those became more of a game than an accessory.

My preparation... took a bit more. First, I had to buy a sari. I am no where near qualified to tie it on (quite a process), so our tailor was going to add a few snaps to help. During the day, I went with a friend to have henna done our our hands, arms and feet. Henna to me is like having nails done to some ladies; I could do it regularly and never get tired of it. In the end, I still had to stop by a friend's house to have her housekeeper help me get dressed... and pinned... and change my not-fancy-enough jewelry to something gaudier. Just when I thought I was done, the housekeeper decided upon herself to pull down my hair to re-do it. Apparently, she wanted to take a comb to my "messy" up hair. Not what I had in mind.... and the outcome was really not what I had in mind. No time to salvage much, so off we went.

I expected a lavish affair long into the night, which is the case for most rural weddings. As this was a big city event, the guests are invited in shifts, ushered up front to pose with the newlyweds and then rushed through family style dinner, so the next shift of guests can arrive to do the same, and so on, all through the night. We were round 1. Being Americans, and caucasian, we were immediately greeted at the door and moved to the front of the line to see the beautiful couple. Temporary blindness was felt by all after the nonstop camera flashes for minutes by the photographer and nearly every other guest. 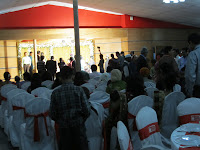 We were very honored to be a part of their special day!
Posted by Denise at 8:56 PM