Last weekend, we took a 1/2 day guided tour of Old Dhaka City, offered by the CLO (Community Liason Office) at the Embassy. The are sort of the "party planners" and people who work to keep the community flowing smoothly and moral up for the post. They do a really great job and are a warm place at the Embassy to praise or vent when needed.

We all rode on an air conditioned bus (so necessary) to the sites, sometimes getting off to explore and other times just driving by with narration. I had wanted to see these sites before the bambina arrives, and think they are some of the "must see" locations while in Bangladesh.

Here are some of the highlights: 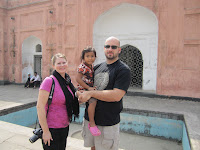 (above & below: Lalbagh Fort)

(above: Dhakeswari- the Natl. Hindu Temple)
(below/ next 3 sets: Star Mosque) 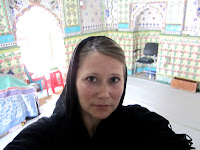 From the pictures I'd seen of the Star Mosque, I'd always thought it was larger. Surprisingly, they let our group of women come inside and take photos, but a scarf had to be worn. The mosaics inside were beautiful.

(above & below/2 sets: Armenian Church)

(below: flower vendors on Hindu Street)

The Pink Palace is probably the cleanest and most well preserved location we've seen since arriving in Bangladesh. It is also the largest complex we've seen.

(above & below: Ahsan Monzil (the Pink Palace)

The riverfront was cool to see, but the pollution is the most severe we've ever seen. The water was grey with irridescent sheen on top. You couldn't see into the water, and the smell was stomach turning. Little boys were swimming alongside the vessels, while produce vendors and commuters scurried about. It's sad how the river seems so dead; I can't imagine there is any life in that stretch of water and if there are fish, I certainly wouldn't eat them. Raw sewage runs everywhere throughout Bangladesh. People squat on the side of the road along gutters to do there business any time of day. Surely this all flows into the larger rivers and even eventually into the Bay of Bengal.

(above & rest below: Sadarghat River Front)